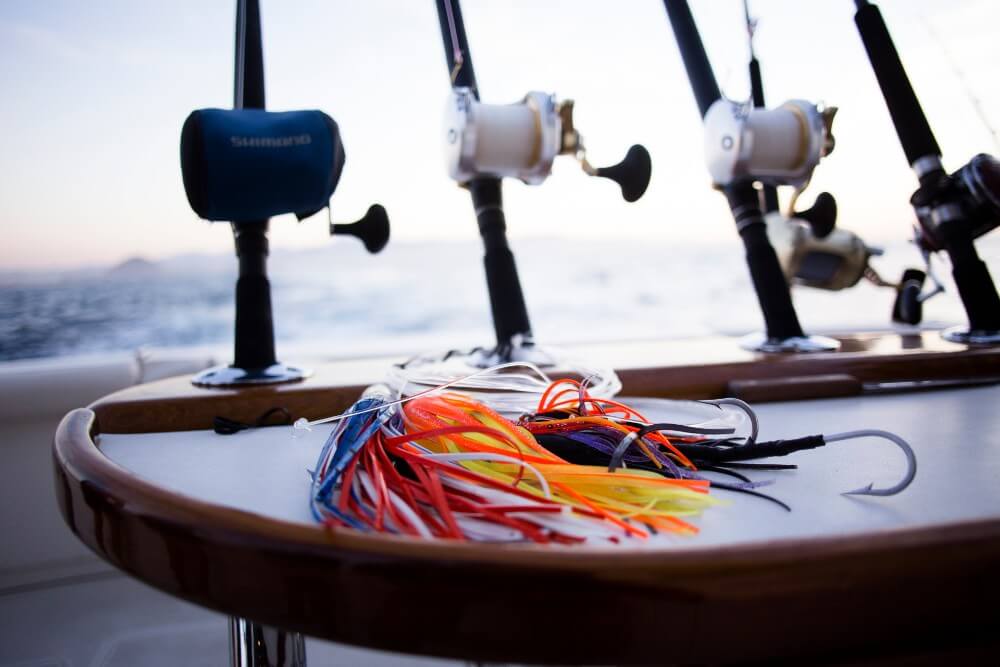 Fishing the azure waters of the Sea of Cortez to Land’s End where the Pacific Ocean meets the Sea, is an unbeatable combination.

Cabo San Lucas is the unofficial “Marlin Capital of the World” and has gained an international reputation, as this is the haven for the World’s most sought after big game fish. Imagine landing a 1200 pound Monster Marlin!  It’s a year ‘round sport with the fish active most of the year.

Setting the stage, you are sleepy awake at 6 am as you head to the docks to board one of the many boats making up the Blue Sky fleet.  Your coffee in hand, you, your shipmates, captain and crew, head over for bait and licenses.  As you wait, the water laps at the boat impatiently, calling you out to sea.

Striped Marlin can be found in the slightly colder months, with Blue and Black Marlin appearing as the waters get warmer.

Deep water ahead, a few miles from the shore where multiple seamounts and banks are accessible for a full day of fishing.  Your captain knows the prime the banks and ledges where the fish lurk below.

Well known “hot spots” are the Golden Gate Bank 15 miles North of the Marina, South of the Lighthouse 2-15 miles out, the Gordo Banks, 22 miles northeast of Cabo San Lucas on the Sea of Cortez side, and the famous Finger Bank, a Bill fishing paradise that is located 50 miles offshore. 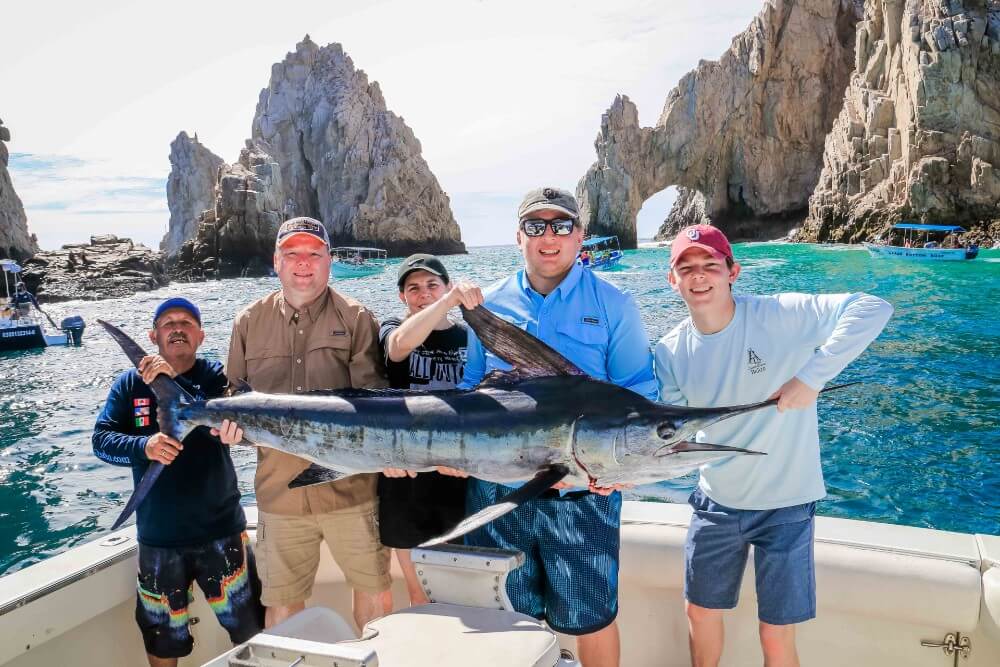 Trolling is by far the most popular type of fishing in Cabo San Lucas, with most charter boats using a combination of live bait, artificial lures, and teasers.  Live bait is caught daily and typically a larger fish, such as mackerel may be used.|

The majority of your catches are made using artificial high speed trolling lures or other tackle. Live bait is used primarily when the crew spots fish on the surface or when there are large schools of fish and multiple hook ups are in order. This happens primarily during strong Marlin or Dorado bites.

Licensing in order, the boat rolls out of the Marina heading toward the fishing grounds. You might catch a glimpse of “Poncho”, our world-famous sea lion(s) who trolls the Marina for treats, scraps and even steals a few fish unexpectedly.  If he’s not there as you leave, you can bet he will be there to greet you as you return with your bounty at the end of the day.

As the sun starts to rise with spectacular colors, you move past the 2 mile protected area, heading towards deep blue.  Its not unusual to travel at least an hour from shore before the lines are cast out.  The captain and crew will be checking fish finders, listening to the radio for reports from other boats, setting GPS coordinates and looking for active fish, dolphins and birds that indicate the presence of schools of fish below.

Trolling is the main way to catch Marlin, that is simply the boat pulling lines behind it with lures, live bait or teasers to attract fish.  You may have multiple lines in the water at one time.  As the crew scans the water for action, it’s a great time to check your pack, slather on some suntan lotion and take out the Polaroid sunglasses.  The coffee’s long gone and most people hit their coolers for a cold libation about now.

The lines scream from the drag on the reel when a fish is hooked. The crew will grab the pole and set the hook on the fish and hand you the pole. OMG!  You have Marlin !

It may not be a 1200 pounder, but the fight it’s going to put up may take hours before it’s in the boat.  You take a seat in the fighting chair, you reel and pull and reel and pull – one on one with the fish.  It rears up out of the water and you take in the beauty and magnificence of Mother Nature at her best.

At this point, landing it into the boat may become a community effort as the crew assists, your friends cheer you on, your arms and legs start to burn, but you stay the course. Landing a fish of this size is not easy. Enjoy the fight. Don’t lose the fish.

As you and the fish tire, the crew will pull it to the side of the boat, on short line.  It’s not easy to drag a fish weighing several hundred pounds into the boat, but eventually, it makes it way up and over.

As the crew measures it up, you and your friends whoop, holler and take photos.  Plenty of back slapping, beer toasting and congrats are going on.  Someone just Facebooked a photo to the Internet.  Your catch is now “official”.

Catch-and-release is encouraged in Cabo San Lucas, and there is no limit to the amount of fish you may release back into the ocean.

You can release a fish and have a replica made, the crew will measure the fish, take photos and inform the taxidermy company to meet the boat upon arrival.

There are taxidermy shops in Cabo and the crew will also help before you get back, if you let them know that you are interested in mounting.  A side note, mounting is not cheap and mounting big fish can cost thousands of dollars.

You can also keep the fish. Griselda’s Smokehouse is popular for processing.

Prices vary depending on size and amount of fish from $3.00 us dlls per fish for simple filleting.  Or around $2.50 us dlls per pound for filleting, vacuum sealing, freezing and storing your catch. The fleet managers or crew at the docks will be able to help you get your fish processed.  While that’s being done, stop over to one of the local watering holes on the Marina for B&B (Bragging & Boozing)

And of course, Poncho will be waiting for that unused bait as his toll for your re-entry into the Marina, as he swims right up onto the transom of your boat, mouth open and waiting.

If your Marlin was a “keeper”, there will be more cheers from the marina crowd as your Marlin is hoisted up on the scales for more photos and bragging rights.

Whether you catch and release or catch and keep, there is no greater thrill than hooking the mysterious, magnificent Marlin.